Melvina Banks was put down by vanity—literally.

She’d flipped her hair down, then up, while blow-drying herself into a heated frenzy. As a result, she lay on the cold tile of her bathroom, moaning in pain. That last toss and swish was her back’s final undoing. Tucked into flesh-colored Spanks, she lay on the teal-and-white-checked floor. Small bullets of sweat beaded on her freshly painted face.

Hell, there goes my makeup.

Patting her hands on the floor around her, she searched for her cell phone. Hoping she’d knocked it from the corner of the sink in her fall from grace, she winced as another spasm shot through her lower back. Then she remembered it was in her bedroom on the bed. Probably lost beneath the mound of clothes she’d plucked from her closet while trying to decide what to wear.

If I die here, they’ll eventually discover my lifeless form gripping my roller brush for all eternity.

She wished she’d accepted Mona’s invitation to set her up on a blind date. At least the poor fellow, whoever he was, would be able to hear her scream from outside and call for help.

Instead, she had shaken her head, saying she didn’t need the additional complication in her life. Besides, sitting across from a stranger, making awkward small talk while he silently judged if she were worthy enough for him to pay for her dinner, was not Melvina’s idea of a romantic night out.

She’d had enough of those dates in her twenties and thirties to know they never turned out great. She usually ended up paying for her own meal and sometimes her date’s dinner as well. She was embarrassed to admit she was left with the check more than once.

Melvina tried to push herself up from the cool floor and gasped as a lightning bolt of pain shot along her spine and down to her hip. She was due at the Magnolia Ladies dinner in twenty minutes, and it took fifteen minutes to drive to town. It wouldn’t be the worst thing in the world to miss a Magnolia Blossom Ladies League dinner, but she had a role in the actual event. She was meant to introduce Cecilia Lockwood, reigning president, so that Cecilia could then introduce their esteemed guest for the annual fundraiser.

This year’s proceeds were allocated to the construction of another fire station in the growing community of Magnolia, a blossoming suburb of Houston. The guest speaker would be none other than Riley James Nash, renowned chef and area native, recently making his big splash on the Food Network. He was the owner and head chef of Braised, the hottest new restaurant in Houston, and there were rumors two other locations were opening in New York and San Francisco.

Ah, to be a Food Network star….

If that happened, she would be able to open her dream cupcake shop, maybe even expand to other places. On many occasions, she’d imagined building a cupcake mini-empire, including big cities like San Francisco. She’d flown there once for a cupcake convention and had fallen in love with the small town of Half Moon Bay. With a population of only ten thousand residents, Half Moon Bay was more her speed than San Francisco proper. But the folks who visited the small coastal town on the weekends would provide plenty of business for her booming imaginary bakery.

Unfortunately, she would never own her own business if she couldn’t make the right connections and get someone to back her dream. A dream that wouldn’t materialize if she didn’t get off the floor and make it to that dinner. Riley Nash could very well be her lucky lotto ticket to owning her own bakery.

She placed her hand on the white cabinet door and slid herself across the tiles, squeaking again with pain. Putting both of her heels as close to her buttocks as possible, she pushed hard with a heaving grunt and then repeated the motion several times until she’d slid herself into the bedroom to the foot of her bed. Reaching up, she fumbled her hand around on the mattress and tugged. A mound of clothes showered her, and a button on one of the dresses tangled in her freshly brushed, long blonde hair. She tried to swim free of the many layers of fabric, blowing out her breath hard when a scarf floated over her face.

“Ow,” she complained, finding the loop in her hair to release the oversized button. The sultry beat of the old but catchy Junk in the Trunk, by The Black Eyed Peas, blared from above, taunting her rather curvy rump, currently stuck on the bedroom floor. Melvina had chuckled when her friend, Mona Calhoun, had downloaded the tune onto her cellphone the last time they had cocktails at Bubbles.

Melvina imagined her skinny, small-bottomed friend wiggling around on her own front porch, centered in the middle of High Valley Estates Golf Community. Mona was a trust fund baby who was still spoiled rotten at the age of forty-one and was one of the first people who’d bought in the elite new housing community.

Some of the stauncher neighbors had complained about Mona’s lively paint choices for her mini-mansion and the amount of time she sipped margaritas while watching Louis, the lawn guy, trim the hedges. More than likely, the residents were upset about the laughter coming from inside Mona’s house after the lawn work was finished. Louis was a twenty-something attractive Latino and Mona was almost twenty years his senior…but age never stopped Mona.

She often bragged about her cougar status, telling anyone who’d listen, “As long as they’re of legal age, handsome is handsome.” Right along with, “What’s good for the goose….” 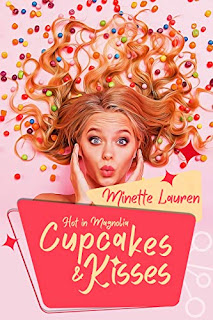 What does it take to make it Hot in Magnolia?

Magnolia, Texas, might be booming with single men, but as far as Melvina Banks is concerned, it’s a bust. Between her volunteer work with the Magnolia Blossoms, tutoring at the local library, whipping up cupcakes for the local firefighters, and working at her dad’s diner, she has no time for blind dates let alone finding “the one”. Melvina would much rather spend her precious down time fine-tuning her plan to open a bakery. When celebrity chef, Riley Nash comes to town for a Blossoms fundraiser, Melvina hopes for a chance to pick Riley’s business-savvy brain. With Riley’s nationally acclaimed talents and his successful new restaurant, Braised, he just might be the one who can help Melvina whip her blossoming idea into a recipe for success. Trouble is, she can’t seem to keep her mind on business when it comes to Riley’s devilish good looks and sizzling charm. The heat is turned up when Magnolia’s handsome fire chief, Manny Owens, sparks an interest in Melvina. Torn between two of Magnolia’s hottest bachelors, she can’t help but feel the burn. Can Melvina separate her rising affections for both men, or will she end up with egg on her face?

Cupcakes and Kisses is the first book in the delicious new romantic comedy series, Hot in Magnolia, by award-winning author Minette Lauren. Set in the burgeoning town of Magnolia, Texas, this hot new series is brimming with laugh-out-loud moments and chock-full of endearing characters who will have you rooting for love and cheering for happy endings.